Something old, something new. It’s the New Year! 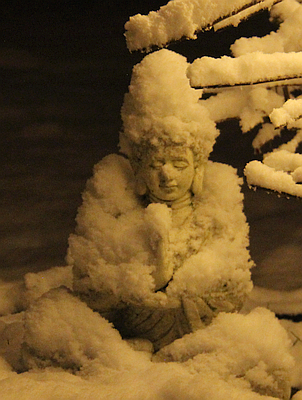 I am referring to the time when I, a nobody, had just become Enlightened and was still a no one. I resisted the stereotypical descent into becoming a someone, but inadvertently joined a special class of beings: the Spiritual Teacher Jet Set.

For several years I refused to have a “teaching” despite continuous nagging from seekers, publicists and publishers. Instead I told nonsensical jokes and irreverent stories. I was somehow immediately recognised and thus received into the open legs of the nascent Advaita/non-dual/satsang community. A good time to become a best seller.

However and not before too long I decided to beat a hasty retreat. It was like I had taken a wrong turn on the way to an ecstasy rave (I have never taken drugs) and had ended up in a philosophical cul-de-sac – in fact, like much New Age, a cognitive wasteland. I can manage anywhere but I get bored easily. I announced my resignation in an article that explained why I was no longer an honorary member of WASTE (Western Advaita Satsang Teaching Enterprises). Following my resignation, I received a lot less free marketing, in fact, none.

Spiritual seekers do not know how to pigeonhole me. Consequently they cannot figure out if I am their “cup of tea”. I quickly became irrelevant to just about every spiritual category – I was spiritual niche-less. Is this what Nietzsche meant by nihilism? No one heard about me anymore because I moved to Finland to join a pack of sleigh-pulling Huskies in Lapland. I listened to Evanescence (“My Immortal”) on an old Walkman to console myself. Sometimes it was so cold that the Walkman froze.

Although I was (fortunately) the spiritual scene’s persona no grata I still was not quite no one. People recognised me in the street and on public transport. I was still a “spiritual teacher” even if in a class of my own. The value of tradition is centuries of promotional networking. I have given it all up.

You may think, “there but for the grace of God go I”.

Mine is a salutary story of the fate that potentially awaits anyone who becomes Enlightened: gobbled up by the STI (Spiritual Teacher Industry) (which if you think about it is an obscene and absurd image!) Ironically, the Hollywood-style STI does not actually want Enlightened Anyones. Enlightened Beings, being truly free tend not to follow rules or roles. They ruin spiritual stage sets. They refuse to believe.  Spiritual Tinseltown requires belief to keep pumping (and humping) its customers. The biggest beliefs that spiritual seekers have are, of course, spiritual beliefs - which is why no one ever gets out from the spiritual cul-de-sac (i.e.  they never get Enlightened).

My own Enlightenment happened after I started rattling my own self-imposed belief cage. We all obediently agreed to be locked into a spiritual chastity belt as the price of entry into the spiritual marketplace. Now is the time to re-evaluate that decision.

If I am to be of any use then I have to stand outside of the marketplace in a spiritual no man’s land. I’m sure that I will find others there.