Revealing the Psychosomatic Bind that Creates the Illusion of Separation

Revealed in the last online interactive dialogue was “The Bind”, a mental mechanism designed to create a one-way valve in the mind, information goes in but it cannot go out. This means that person becomes like a lifeless paralysed fish - gasping for air, seeing the world but unable to do anything about it. Perceptions go in but no action comes out.

“The Bind” works against a person’s efforts in a paradoxical way. The harder they try to become their self, the further away they drift. It’s like being stranded on a raft in the ocean, as you try to paddle towards the paradise island ahead you find that you move further away from it.

Ironically, a person is already what they seek. They cannot be any other. But there is a presumption that they are not themselves and that they have to work towards becoming their self. Most seekers are caught up in this trap in which the faster they spin the hamster wheels the faster they get nowhere. More effort is not required, but less. The creation of effort is what creates a false identity which, like the Mad Hatter, always claims that it is late for some important but never defined date. 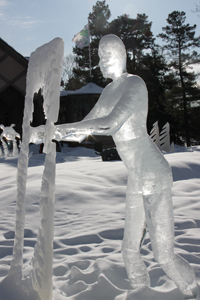 The Paradox of Self-Driven Change

The Bind is work of art. It is economy in motion. It is guaranteed to work. All that it requires is a person’s desire to improve their self. As soon as the person moves, the ligature tightens. The harder they try, the more the knot secures their paralysis. If a person moves then they are constrained, if they stop moving then they are paralysed. One way brings pain, the other brings apathy. Both states lead nowhere. An elegant problem. An intractable solution. Even when knowing the problem is it possible to find the answer?

It would seem that the problem has to be solved prior to first causes. Somehow you have to return to a time before you presumed that you were not okay. Since that time no longer exists and existed during a time when your cognitive apparatus were pre-verbal, access is going to be a problem. You are most familiar with receiving impressions from the superficial part of your mind that is not subconscious. You receive the result of innumerable cognitive and physiological processes without having a clue how it happened. To understand, and change, what happens within your mental architecture you will have to travel into the micro-processes of the body, the hardware platform for your mind.

What we aim to do during live online interactions in groups and one-to-one is to make visible the mechanisms that throw a cloak of invisibility over your inner desires and urges and thereby reveal the illusion that has covered your eyes for so long.

The Bind takes on a personal form for each individual and essentially defines their character and determines their inner struggle. It is a joy to discover it and give a person the chance of freedom.

PS The Bind was revealed in last week’s Truth Dialogue ‘Unplugging: The Unprogram Party’ If you missed it then you might be able to book a replay by email (or contact-form). The next Truth Dialogue is ‘Spiritual Clarity meets Mental Architecture: Solving the Bind of Identity’.