Just before a tsunami hits, animals have been observed to escape to a safe place.

A bolthole is an escape route. Animals have them in case they are pursued. Some human beings have them, particularly survivalists (colloquially known as ‘preppers’). 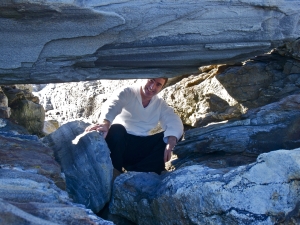 Why would a spiritual teacher be introducing the idea of a bolthole? Are the mountain’s about to fall  on us or the oceans swallow us up as predicted for the Last Days in the Bible? It would have to be some kind of clever bolthole to escape natural disasters – human beings are ever resourceful, though. A bolthole can also be a safe house. Safe houses are secret locations where people can hide to protect their privacy or evade capture. However, the safe house doesn't have to hide a human being, instead it might provide sanctuary for something that is considered to be more precious than life itself – as odd as that may sound.

Secret societies and religious communities have, according to lore, hidden a variety of artefacts including holy scriptures, talismans, code books and ritual items. Knowledge, after all, in all its various forms, is power. Examples range from the Dead Sea Scrolls buried at Nag Hammadi to Jacob's Pillow Stone (supposedly the Stone of Scone at Westminster Abbey) to the Ark of the Covenant (allegedly in an Ethiopian church) and to the spear that killed Jesus (sought after by certain Nazis). Egyptian pharaohs were sealed within pyramids with everything that they possessed (including servants) so that they could go forward with those belongings into the next life. The Pharaohs reportedly were fairly well preserved, if a bit wizened, and minus a few essential items -  such as their brain matter. But is anywhere really safe? And is there anything on Earth that is incorruptible?

I’m not about to promote the concept of physical immortality. It’s a nice idea, but you would speculatively spend a lot of money on well-marketed vitamin supplements (unless you are fortunate enough to live on rich, pure, fertile land). While I hope that individual human beings will have the possibility to permanently reside on Earth, at this time is not an option because human beings are so destructive. Perhaps this is why God kicked Adam and Eve out of the Garden of Eden and human beings started to die – as a protection for Nature. No -- you and I are going to die – physically, at least. And there is no safe place to hide. Hospitals, for example, are notoriously unsafe.

Imagine if you will a dry, arid dustbowl of a planet. That’s Planet Earth – devoid of love, crying out for compassion and groaning under its heavy burdens. Make no bones about it, this tragic situation is because we humans are not fulfilling our true roles. We are supposed to irrigate the planet with love, compassion, fairness and kindness. Instead, as all eyes can see: there is war, hunger and starvation – everywhere. What the economy needs is not more paper money to prop it up – but ‘The Currency of Love’. But dig your hands deep into your pockets and you’ll find very little of that love to go around. Love has to be pure, like the purest mineral water. But where is that well supplied by that pristine, untouched pure Source? Where is that Love?

The Enlightenment Transmission takes us back to The Source. There we find Love and we become filled with that Love. But that Love that we draw from the well is not simply for ourselves alone - It’s for others. And if we take that Love to others, something remarkable will happen. People will change – for the better.